Over £1.5 billion of investment awarded to upgrade motorways in England 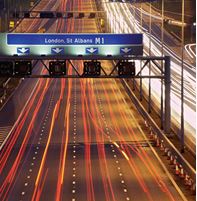 Highways England has appointed six joint-venture companies to design and build 10 ‘smart motorways’ across England as part of a £1.5 billion investment.

Three of these projects will start in autumn this year: 2 in the Midlands – M1 junction 19 to junction 16 in Northamptonshire and the M5 Junction 4a to Junction 6 in Worcestershire, and 1 in the North West – M6 junction 16 to junction 19 near Stoke-on-Trent.

The smart motorway schemes, part of the £15 billion government investment Highways England is delivering between now and 2021, will see 292 extra lane miles added to motorways. The hard shoulder will be converted to a traffic lane and signing and technology will tell drivers what speed to drive at, if lanes are blocked or closed and about incidents up ahead.

Key FORS companies in the construction sector such as Amey amd Costain have been appointed to carry out these improvements.

Valued at up to £1.55 billion in total, this is the second major procurement to be awarded under the company’s Collaborative Delivery Framework (CDF). The first was the appointment of designers and contractors for the A14 Cambridge to Huntingdon improvement which was announced last month (June).

Roads minister, Andrew Jones, said:
As part of our long-term economic plan, we are investing more than £1.5 billion over the next five years in upgrading congested sections of motorway. This means better journeys for millions of people across the country, easier access to jobs, and stronger links between towns and cities. This is good for the economy and good for Britain.

Highways England smart motorway programme director, Andy Watson, said:
We have awarded these contracts to the companies who demonstrated to us they will work together, across all the projects, not just the ones they have been awarded. They proved they are driven to get the best results on price, quality and on reducing impact on road users: keeping the motorways flowing while they construct these vital improvements.