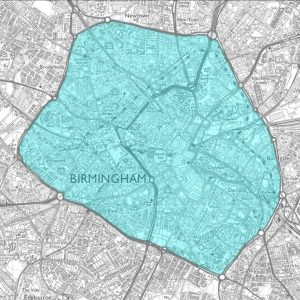 Birmingham City Council has revealed it plans to introduce a new Clean Air Zone (CAZ) in the city, from January 2020.

The new CAZ seeks to help the city reduce levels of NO2  and will operate  24 hours a day, seven days a week, covering all roads in Birmingham City Centre.

Charges set out under the scheme range from £8 per day for LGVs and taxis (Hackney Carriages & Private Hire), to £50 per day for HGVs, with no charge for motorcycles, mopeds or scooters.

Exceptions to the proposed Birmingham City Centre CAZ charges will apply to vehicles that meet certain criteria, depending on the fuel type, as follows:

For further information on the Birmingham CAZ, click here.