Industry recognition for McGee at the Brake Fleet Safety Awards 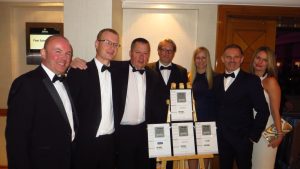 The company was presented with a Highly Commended Award in the ‘Fleet Safety Product’ category for the invention and introduction of a bespoke Mobile Vehicle Inspection app. Introduction of the app has enhanced daily vehicle inspections above and beyond health and safety regulations, and company policy requirements, by revolutionising previously paper-based systems.

McGee use the app to ensure that drivers inspect their vehicles to the highest of standards, instilling confidence that every vehicle leaves their transport facility in roadworthy condition. Since the app’s launch in late 2014, McGee’s drivers have carried out 7,000+ digital inspections, with a number of defects being addressed instantaneously.

The partnership challenged 45 of Nottingham Trent University’s BSc (Hons) Product Design students to design a cycle safety system for an existing tipper truck that improved safety for vulnerable road users, was aerodynamic, commercially viable and suitable for both off-road and urban conditions. The winners and runners-up will see their solutions manufactured, retro-fitted and trialled by McGee.

John Hennessy, McGee Group Health & Safety Director, said, “It is an honour to receive three Highly Commended Awards in this first year entering Brake’s Fleet Safety Awards.  It is a tremendous accolade for everyone that has been a part of the success of these projects.”

The winning and the highly commended organisations at the Fleet Safety Awards were announced at a ceremony held at the Hilton Birmingham Metropole on Thursday 29 September, which was attended by more than 350 business leaders and industry professionals.