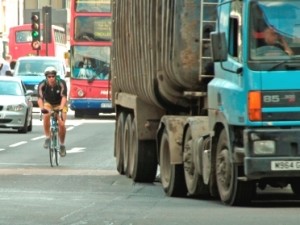 A new TfL-funded Commercial Vehicle Unit, run by the City of London Police, has launched a crack-down on dangerous vehicles in the City, stopping 136 vehicles and taking 95 dangerous vehicles off the road during its first month of operation.

The unit has been set up as part of a far-reaching effort to further improve road safety and take non-compliant and unsafe commercial vehicles off the roads. HGVs are involved in a disproportionate number of collisions, particularly those involving vulnerable road users, and Transport for London, and its policing partners, are committed to reducing these incidents through education and enforcement activity.

During the unit’s first month of targeted, intelligence lead operations, it found drivers of the 95 non-compliant vehicles to be committing a number of offences, including:

Steve Burton, TfL’s Director of Enforcement and On-Street Operations, said: “The newly formed City of London Police Commercial Vehicle Unit will help us go further in targeting the most dangerous HGVs and taking them off our roads.

“Our enforcement activity is targeted at improving road safety, and alongside our policing partners, we will be using all of our powers and intelligence networks to ensure vehicles that are not safe and compliant will no longer be able to operate.”

The new team will complement the already established Metropolitan Police Service (MPS) Commercial Vehicle Unit and the Industrial HGV Task Force, that work across London enforcing against dangerous commercial and construction vehicles and their drivers. It will also work to enforce the Capital’s forthcoming Safer Lorry Scheme, which gets underway on 1 September.

TfL has also part funded a new Freight Compliance Unit, who will work closely with, and support, London’s enforcement and regulatory agencies, including the Office of the Traffic Commissioner.

The Unit, which includes staff from the Driver and Vehicle Standards Agency and the MPS, will undertake analysis and work with on street enforcement teams to ensure there is a coordinated, intelligence-led approach to taking non-compliant HGV drivers, vehicles and operators off the Capital’s roads.

The unit will also make use of Automatic Number Plate Recognition cameras to identify any operators who have had their licences modified or taken away by the Traffic Commissioner, and ensure the on-street enforcement teams are targeting these non-compliant operators.