At a time when the threat level from international terrorism in the UK has been set at ‘Severe’, commercial vehicle operators are being offered additional guidance to help ensure they are doing all they can to minimise the risks of one of their vehicles being used as weapon during a terrorist attack.

FORS, which represents more than 5,000 commercial vehicle member operations across the UK, acknowledged the increased threat level in the revised edition of the FORS Standard, which came into effect at the start of this year, and sets out the requirements operators must meet if they wish to become FORS accredited.

Here, FORS Director John Hix, explains the importance of ensuring operators have a robust counter-terrorism policy in place, and why preventive measures combined with driver training are integral to improving safety and security:

Q1. What are the new counter-terrorism measures as set out in the revised FORS Standard version 5?

In order for an organisation to pass the FORS Bronze audit, it must now have a policy and supporting procedures in place to help safeguard against potential security and terrorist threats.

One element of this policy is to ensure that operational staff are trained to recognise threats, and that they know what to do should a threat be made, or in the event of an attack.

Owing to the growing governmental concern on potential terrorist acts, we felt our members should receive this training at FORS Bronze, our first level of accreditation.

On top of this, in order to pass the FORS Bronze audit, drivers must now complete the FORS Professional ‘Security and Counter Terrorism’ eLearning module, within the 24 months prior to audit.

Q2. Why were these changed made?

It is a sad fact that commercial vans and trucks are used in terrorist-related incidents, both in the UK and abroad. In 2017 alone, 14 people were killed in London in three separate attacks where a commercial vehicle was used as a ramming device, in what is referred to as a ‘Vehicle as Weapon Attack’.

As an organisation which champions safety as a key principle, we wanted to ensure FORS members were not only aware of this threat, but that they had the training and policies in place to keep staff, vehicles and the community safe.

An organisation’s counter-terrorism policy should include every element that the organisation considers may be at risk from potential terrorist threats, and must be supported by clear procedures, setting out consistent steps which employees should follow to mitigate such risk.

For example, fleet operators should consider how vulnerable their vehicles are to theft, and if they could be used to aid terrorist objectives, and FORS encourages members to consider non-physical threats when they consider risk. For example, understanding which company information is available to the public, and could it be used to facilitate an attack?

Members must also appoint a Counter Terrorism Champion to (among other things) implement emergency response plans, complete risk assessments and ensure all staff are confident in their duties as set out in the policy.

Q4. In what ways can technology help to support a counter-terrorism policy and procedures?

Nowadays, there is a wide range of technology available that can be used to help support a counter-terrorism policy. Remote door locks, ignition locks and other safeguards can help to prevent vehicles from being stolen and used as transport or as a weapon. In addition, telematics systems are useful for tracking vehicles and letting operators know exactly where their vehicles are during an emergency.

Q5. How often should fleets review their counter-terrorism policy and procedures? And why so often?

Outdated policies can put a fleet at risk, so it’s important that they are updated on a regular basis – at least every 12 months. However, it may be necessary to update policies and procedures more frequently, for example, in reaction to an increase in the UK’s threat level.

Q5. How does FORS help members develop and maintain their counter terrorism policy? 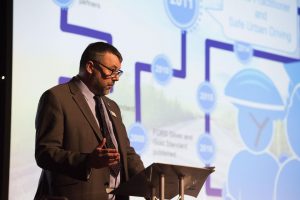 A crucial element of a counter terrorism policy is completion of the FORS Professional Security and Counter Terrorism eLearning module. Since it was launched in January 2018, more than 36,000 individuals have completed this training, which helps drivers identify threats around vehicle security and focuses on measures which can be in place to protect drivers and vehicles against hijack, theft and physical attack, with advice on how to report suspicious behaviour or activity.

Though primarily aimed at drivers, and a mandatory requirement to be undertaken every 24 months, managers are also encouraged to take the free-of-charge module, which was produced in collaboration with Transport for London, the Department for Transport, Metropolitan Police, High Speed 2 and the DVSA.

FORS has also produced a free toolkit to help members meet the new counter-terrorism requirements, highlighting each elements required to develop an effective counter-terrorism policy. Members will learn how to recognise threats, both direct and indirect, with information on how to identify vulnerabilities, such as people working within the organisation, physical assets, information and processes.