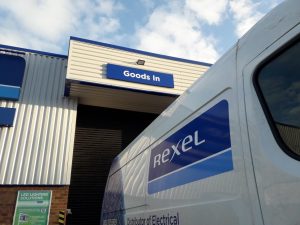 Rexel UK, one of the UK’s leading distributors of electrical goods and services, has become the 1,000th company to attain Silver accreditation with FORS – the Fleet Operator Recognition Scheme. The accreditation applies to Rexel’s Dagenham location – one of 17 sites made up of Distribution Centres, hubs and larger locations right across the UK.

Since joining the scheme in 2014, Rexel has attained FORS Bronze status at nine of its hub locations, although FORS best practice principles have been adopted throughout the company’s 17 sites made up of Distribution Centres, hubs and larger locations. Rexel UK maintains an objective to achieve FORS accreditation across its entire transport network, including 250 further locations. The company operates 519 own-account vans and trucks, with approximately 600 drivers, distributing to the electrical trade.

Utilising FORS training courses and eLearning modules, Rexel UK drivers continue on their pathway to increasingly high levels of professionalism by boosting the company’s safety performance, improving fleet efficiency and promoting overall sustainability. In the last 18-months, Rexel UK has seen a 6.4% improvement in fuel economy, a reduction of 629,008kg in CO2 emissions, a 20% reduction in insurance costs and a reduction in penalty charge notices

“We are very proud to be a member of FORS,” said Head of Supply Chain Operations, Paul Rotchford, “We are a delivered business which accounts for upwards of 75% of our sales. As such, we take great pride in our transport operations being progressive – FORS helps us greatly with this objective within Rexel UK.

“FORS has emerged as the default position for all our transport acitivities,” he said, “and FORS Silver at our Dagenham site means we go beyond legal operational requirements. Our vehicles are now fitted with a range of safety devices,” he added, “and the whole transport operation is performing to a FORS code of best practice. Safety is paramount, for our drivers and vulnerable road users – and we can demonstrate it, too.”

With no formal transport-related training before 2012, Rexel UK has since achieved exemplary levels of operation as a direct result of driver and manager training – delivered in-house by a qualified Learning & Development team, and in partnership with FORS. The company has also developed its own in-house training courses, based on the FORS Standard. As an own-account operator, Rexel UK’s rolling two-year training programme is at a level and intensity more associated with some of the UK’s leading, dedicated logistics companies.