Safe and green in 2021 to meet new vehicle rules 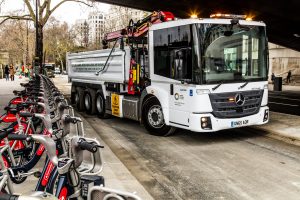 New safety and environmental rules about to be rolled out will have an impact on heavy haulage and construction vehicles used in the capital.

As is often the case, many road safety and environmental directives which affect commercial vehicles start life in our big cities, where densely populated urban areas and large volumes of traffic create pinch points for accidents and increased emissions.

Indeed, this was certainly the case for FORS, the voluntary accreditation scheme which started 13 years-ago as a London-only initiative and now attracts some 4,600 members across the UK. For many operators, working in the capital is par for the course, with the city the epicentre for many key infrastructure projects.

2021 sees the launch of two new London-centric directives, which build on the work our industry has already done in recent years to improve safety for vulnerable road users and lessen the environmental impact of heavy haulage and construction vehicles.

Direct Vision Standard (DVS) seeks to ensure that heavy goods vehicle drivers working in the capital are able to directly see vulnerable road users from their cab. While the pandemic pushed back DVS from its expected launch date in 2020, it will become fully enforced in March 2021 and operators must be fully aware of their safety obligations in relation to the directive and the new permits which will be required for working in London.

DVS applies to all vehicles over 12 tonnes GVW entering or operating in Greater London, who will now need to hold a valid HGV safety permit, which will cover the whole of Greater London, operating 24 hours a day, every day of the year.

Operators who are FORS members will be well used to thinking about visibility as one aspect of a holistic approach to safety and protecting vulnerable road users, through the FORS mix of driver and management training, robust auditing and performance monitoring.

Clear safety guidelines are set out at entry-level FORS Bronze, with operators required to have safety equipment in place, including side under-run protection and Class V and VI safety mirrors and warning signage on all commercial vehicles over 3.5 tonnes.

At FORS Silver member, vehicles must be equipped with safety technology to improve driver visibility, to ensure vulnerable road users are as aware as possible of the vehicle’s movements. Operators must prove all trucks over 3.5-tonnes GVW are equipped with an audible means to warn other road users of a left-turn and reversing manoeuvres, as well as blind spot minimisation measures.

Environmental efficiency is also firmly on the agenda as we head into 2021, as the government seeks to improve air quality and lower carbon emissions in our cities.

The London low emission zone (LEZ) was introduced in 2008 with a more targeted approach to vehicles with higher toxic emissions. 2019 ushered in the ultra-low emission zone (ULEZ) and is credited with making sizeable reductions in emissions and reducing the number of older, more polluting vehicles entering the zone.

From October 2021, the current ULEZ will be extended outwards, with the North and South Circular roads acting as the boundary.  A daily charge of £100 will be levied against all vehicles over 3.5 tonnes GVW that do not meet the required emission standards, and penalty fines of up to £1,000 for those who do not pay the daily fee. The ULEZ standards for existing central London ULEZ and when the zone expands align with Euro VI (NOx and PM) for lorries, buses and coaches and other specialist heavy vehicles. This means that all new heavy-duty engines for goods vehicles and buses from January 2014 are ULEZ compliant.

Yet London is not the only city in the UK with air quality problems. The government also seeks to reduce levels of atmospheric nitrogen dioxide in five other cities, via clean air zones (CAZs) planned for Birmingham, Derby, Leeds, Nottingham and Southampton.

With the pandemic requiring a vast amount of the government spending available, CAZs in other parts of the country have been put on hold until next year at the earliest, but Bath and Birmingham will be the first to introduce CAZs from 2021. Bath will introduce its scheme on 15 March 2021, with Birmingham launching its CAZ on 1 June 2021.

While ULEZ amendments use Euro standards as the benchmark for efficiency, there is much operators can do to lower emissions – when working in a city, or otherwise. Over and above these new government directives, operators should consider how accurate fuel management, route planning, and driver techniques such as anti-idling can positively impact emissions fleet wide.