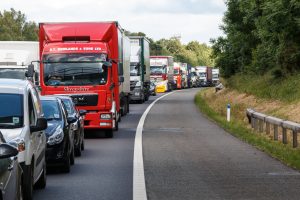 Traffic congestion is costing UK businesses approximately £767 million a year in lost productivity, according to research carried out by TomTom. The sat nav and telematics specialist also calculated the UK’s 25 most congested cities and towns with Belfast coming out on top and with London and Manchester coming second and third respectively. Using these cities as an example, congestion increases the amount of time each vehicle spends on the road by an average of 127 hours a year – more than 16 working days.

The situation is not improving, with the average journey in 2015 taking 29% longer than it would in free-flowing conditions, compared to a 25% longer delay in 2010. The biggest financial hit was in London where the cost to business was £237 million a year.

Beverley Wise, director UK and Ireland for TomTom Telematics, said, “Traffic congestion may be seen as a fact of life for every driver but, cumulatively, it is taking a heavy toll on the UK economy and this should not be accepted as inevitable. Through smarter planning, routing and scheduling, companies can help their drivers to better avoid traffic, which could not only have an impact on productivity but also customer service”.