FORS encourages companies to run safe and efficient fleets and FORS accredited operators are committed to improving the safety of vulnerable road users such as cyclists and pedestrians.

FORS members are required to fit HGVs and vehicles designed to carry more than 16 with blind spot warning signage. The warning signage should warn of the hazard and advise other road users to take appropriate action, for example ‘Blind spot – Take Care’.

There are 3 types of signage – ‘warning’. ‘instructional’ and ‘offensive.’ 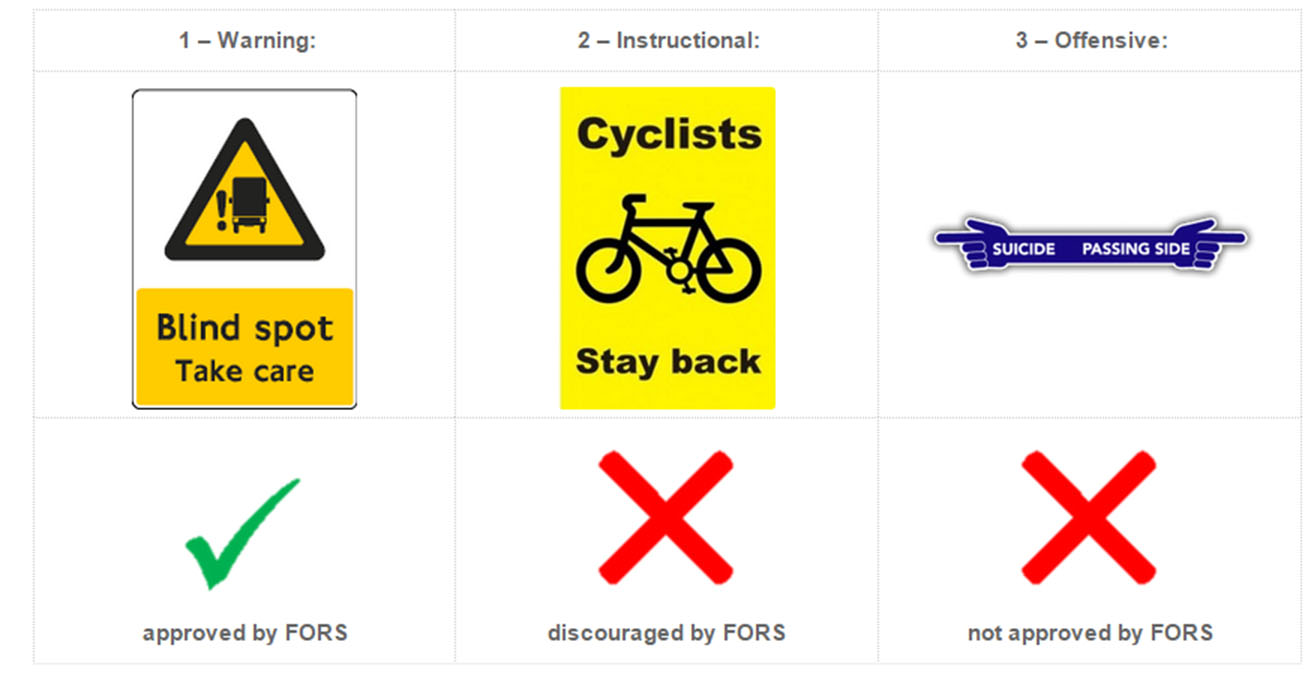 Signage that is considered instructional is not recommended.  FORS guidance is that all existing ‘Cyclists Stay Back’ warning signs should be replaced with the FORS approved signage above, which has been designed in conjunction with the cycling community. ‘Stay Back’ signage fitted to vehicles will result in a Minor Action Point at FORS audit.

Offensive signage fitted to vehicles will result in a Major Action Point at FORS audit. Failure to remove such signage will result in suspension from FORS until it is removed or replaced.

Where it is impractical to display the warning signage on the rear of the vehicle (for example obstruction caused by a beaver-tail or similar), the signage should be placed in a prominent position clearly visible to cyclists and other road users.

Vehicles of 3.5 tonnes gross vehicle weight and under (such as vans) do not need to be equipped with warning signage unless the operator is contractually obliged to do so.

This website uses cookies to improve your experience while you navigate through the website. Out of these cookies, the cookies that are categorized as necessary are stored on your browser as they are essential for the working of basic functionalities of the website. We also use third-party cookies that help us analyze and understand how you use this website. These cookies will be stored in your browser only with your consent. You also have the option to opt-out of these cookies. But opting out of some of these cookies may have an effect on your browsing experience.
necessary Always Enabled
Necessary cookies are absolutely essential for the website to function properly. These cookies ensure basic functionalities and security features of the website, anonymously.
advertisement
Advertisement cookies are used to provide visitors with relevant ads and marketing campaigns. These cookies track visitors across websites and collect information to provide customized ads.
analytics
Analytical cookies are used to understand how visitors interact with the website. These cookies help provide information on metrics the number of visitors, bounce rate, traffic source, etc.
Functional
Functional cookies help to perform certain functionalities like sharing the content of the website on social media platforms, collect feedbacks, and other third-party features.
Save & Accept
Powered by